The True Encounter Above the Courage Line 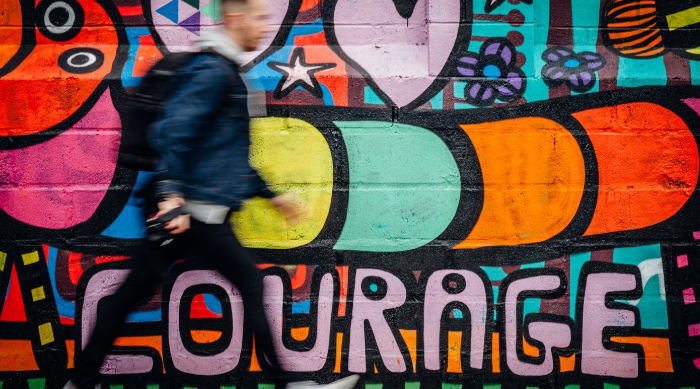 I’d written to members of my community: “As ‘Bridge Builders’ our task, now more then ever, is to support each other in shaping a world where the relational space is safe and sacred, where we honor the ‘Other,’ and where together we create the conditions for the Encounter.”

“What is the Encounter?” asked my friend Marylin after she read my “Bridge Builders” message.

The fascinating story of Derek Black is the best way to appreciate the miracle of the Encounter. His story called “The White Flight of Derek Black” was published by Eli Saslow, in the Washington Post on October 15, 2016.

However Derek Black had the experience of an Encounter. The Encounter is a profound and life-changing meeting with the “Other.” The “Other” in Derek’s life was Matthew Stevenson, an orthodox Jew and a fellow student at New College, in Sarasota, Florida.

Matthew decided that his best chance to affect Derek’s thinking was not to ignore him or to confront him, but simply to include him. “Maybe he’d never spent time with a Jewish person before,” Matthew remembers thinking. Matthew began including Derek in his Shabbat group.

Their relationship grew and developed. It was life-changing for both of them. As Matthew reached out and listened, Derek had a radical transformation.

Here is Derek’s official statement as his consciousness grew:

“I cannot support a movement that tells me that other people’s races require me to think about them in a certain way, or be suspicious of their advancement. The things I have said, as well as my actions, have been harmful to people of color, people of Jewish descent, activists striving for opportunity and fairness for all. I am sorry for the damage that I have done.”

What does it take to create the conditions for the Encounter? It takes bold action above the “courage line.”

What is the “courage line?”

The “courage line” is a concept originated by David Hawkins, author of the “Power vs. Force” book, who studied our energetic levels of consciousness. See my post about Power vs. Force, to get a better understanding.

Here is a war story about my mother, acting above the “courage line” and creating the conditions for the Encounter.

In 1943 my parents were hidden in a cellar in the town of Cannes, in the south of France, with 5 other Jewish people. My mother found out that the Nazis were close, and were about to round up the Jews in that town. She decided to find a “guardian angel.” She put her finger on the name of a doctor in the phone book, trusting that it would be the exact person who is meant to assist her in her escape plan. She went out of hiding.

When she was sitting across from the French doctor, she said to him: “I have come today to see if you could help me. I need a prescription that my husband is gravely ill, and needs to be transported to the next city, Nice. I need an ambulance, a driver, and nurses uniforms for me and the 5 other Jews in hiding.”

The doctor was a good man. With compassion in his eyes, he said: “Unfortunately I cannot sign such a prescription, as much as I would like to help you. I have signed an oath that I would not lie about a patient’s medical situation. And your husband is not ill.”

My mother looked at him from the depths of her soul, and she said: “You are right. My husband is not ill. Humanity is ill. And if you do not sign such a prescription, six people whom I love, as well as myself, will die of the illness of humanity.”

The doctor had a choice to make. Would he continue his life in the small box he has lived in, where he knows what is right and what is wrong? Or would he transcend into a whole new realm, where you love life so much, you are willing to sacrifice yours to save the life of another. And that is what he did. My parents arrived in the next city by ambulance, and with the help of more “guardian angels”ultimately made it to Switzerland, where I was born in a refugee camp.

After the war, my mother wrote a Christmas card to the doctor. She told him: “I am alive. I am back in Belgium, and we have a little baby girl. Thank you for my life.” He wrote back: “It is I who thank “you” for my bigger life!” After meeting my mother, he continued to be a “guardian angel” for many more Jewish people, risking his own life, and saving theirs. The doctor is a good example of someone acting above the “courage line” and continuing his commitment to live at that life-giving and life-affirming level of consciousness.

My mother Miri Muszkal, the French doctor, Derek Black and Matthew Stevenson all acted above the “courage line” and they experienced the Encounter which transformed them all. The Encounter brings us back to our basic human nature, and our full human essence and potential.

May we all be a unified force and empower each other to act above “the courage line” and fulfill the highest purpose of our lives in the service of humanity,